End of an era as Sr Bernadette Marie retires

Last Wednesday was an historic day for St. Anne’s Primary School in Charleville, as a special Mass was celebrated in the Parish Church to mark the opening of the new school year and also the end of an era, as Sr. Bernadette Marie retired, the last Mercy Sister to teach in the school.

The Mercy Sisters’ involvement in education began in the town 179 years ago when three Sisters came to Charleville in 1836 from the Convent of Mercy in Baggot Street, Dublin, They taught in the National School, which was located in what is now the Schoolyard Theatre. In 1932, the Sisters bought a field from Mr. Ball in Smith’s Lane, beside the convent garden. Later, this became the site for the new school, St. Anne’s. From 1941 until 1970, the school was staffed entirely by Sisters of Mercy. In 2001, Sr. Colette O’Connell retired as Principal and Carmel Rainsford became the first lay principal.

Sr. Bernadette Marie came to Charleville in 1977 and taught in St. Joseph’s Infant School for four years before moving to Buttevant. She returned to Charleville in 1993 and worked as a resource teacher and mainstream teacher until her retirement at the end of August 2015, bringing to an end the involvement of Mercy Sisters as teachers in our schools in the town. We wish Sr. Bernadette Marie well in her retirement and thank her for her decades of dedicated service. 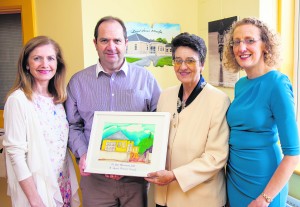